Scholarships under the Gen. Anders Programme for the Polish Diaspora awarded!

Over 600 young people of Polish origin from all over the world will receive scholarships under the Gen. Anders Programme to start their first-degree studies and uniform Master’s degree studies or second-degree studies. In the coming academic year, the holders of the scholarship will begin studies at Polish universities or take courses to prepare for them.

The Gen. Anders Scholarship Programme for the Polish Diaspora creates opportunities for young people of Polish origin (of Polish nationality) and holders of the Card of the Pole (Karta Polaka) to pursue their studies at Polish HEIs in the Polish language. This year’s applications for first-degree and uniform Master’s degree studies may be submitted also by holders of Polish and foreign citizenship who completed their entire secondary school education outside of Poland.

The programme is directed at the Polish diaspora all around the world and each year enjoys great interest. In this year’s call for applications as many as 471 scholarships for first-degree and uniform Master’s degree studies and 131 for second-degree studies were granted. The beneficiaries will study at universities of their choice throughout Poland or at preparatory courses preceding the actual course of study. NAWA offers them a monthly scholarship during the regular education period and an annulment of tuition fees for preparatory courses or at public universities.

The Gen. Anders Scholarship Programme plays an important role in maintaining ties between our fellow citizens dispersed around the world and Poland. For young Poles it is an opportunity to return to their homeland, an opportunity to learn more about the culture and history of their ancestors. Joining the group of NAWA scholarship holders is also an opportunity to choose a course of study at the best Polish universities. The scholarship allows its beneficiaries to focus on studying and pursuing interests, as they do not need to divide their time between studying and working, emphasized Przemysław Czarnek, the Minister of Education and Science. I am glad that every year the programme for the Polish diaspora meets with such great interest. I would like to congratulate the winners of this year’s edition and wish them a lot of success in their studies and the joy of knowing Poland, added the Minister.

My father, Gen. Władysław Anders, attached particular importance to maintaining ties with his Homeland and cultivating knowledge about Polish history and culture among young people. It is a great satisfaction for me that the NAWA Scholarship Programme named after him is so successful, enabling hundreds of young people of Polish descent to study at the best Polish universities and at the same time giving them an opportunity to get to know the country of their parents and grandparents better, said Anna Maria Anders, Polish Ambassador to the Republic of Italy. The NAWA programme is without doubt one of the most interesting proposals to bring young representatives of the Polish diaspora closer to Poland and to encourage them to make further connections with Poland. As the Polish Ambassador to the Italian Republic, I am very pleased to note that a young Pole from Italy will benefit from this year’s edition of the programme. It is crucial that due to the changes in the regulations, the circle of potential beneficiaries of the scholarship has been significantly widened and now also people of Polish citizenship can submit their applications, adds Ambassador Anna Maria Anders.

NAWA is offering scholarships under the Gen. Anders Scholarship Programme for the Polish Diaspora  for four years now. To date, nearly 2,000 scholarships have been awarded. However, it is worth noting that activities dedicated to young members of the Polish diaspora have a longer tradition.

Beneficiaries of the Gen. Anders Scholarship Programme are young, passionate people who have decided to start or continue their education in the country of their ancestors. They often come to Poland from distant parts of the world choosing the best universities and engaging in their everyday life. Their sincere interest in Poland and willingness to promote science in our country can be seen through their involvement in the project “Digital Ambassador NAWA”, under which young people support our Agency in conducting the “Ready, Study, Go!” Poland campaign, says Dr. Grażyna Żebrowska, Director General of the Polish National Agency for Academic Exchange NAWA. This year, as in previous years, the call for applications, despite the pandemic, was very popular. The group of scholarship holders will increase by over 600 people. Among young people from the Polish diaspora, the most popular are such majors as economic sciences and management, computer science or international relations, Dr. Grażyna Żebrowska adds.

Among the 471 scholarships granted, the majority of beneficiaries are citizens of Belarus, Ukraine and Kazakhstan. Fifteen scholarships were awarded to applicants of Polish and foreign citizenship – these were particularly people from Italy, Germany, Jordan or the Czech Republic. The majors that were most popular amongst the applicants included economic sciences and management, computer science, journalism, medical sciences and international relations. Among the universities, where the applicants declared their willingness to study, the Jagiellonian University, the University of Warsaw, SGH Warsaw School of Economics, Warsaw University of Technology and the University of Wrocław were most popular.

Additional support for students from Belarus

In addition, within the framework of the present call for applications, NAWA granted funds for education in the academic year 2021/22 for 356 applicants of Polish origin from Belarus, who will start their preparatory course to take up studies in Polish or will start studies in Polish at Polish universities supervised by the Minister of Education and Science. 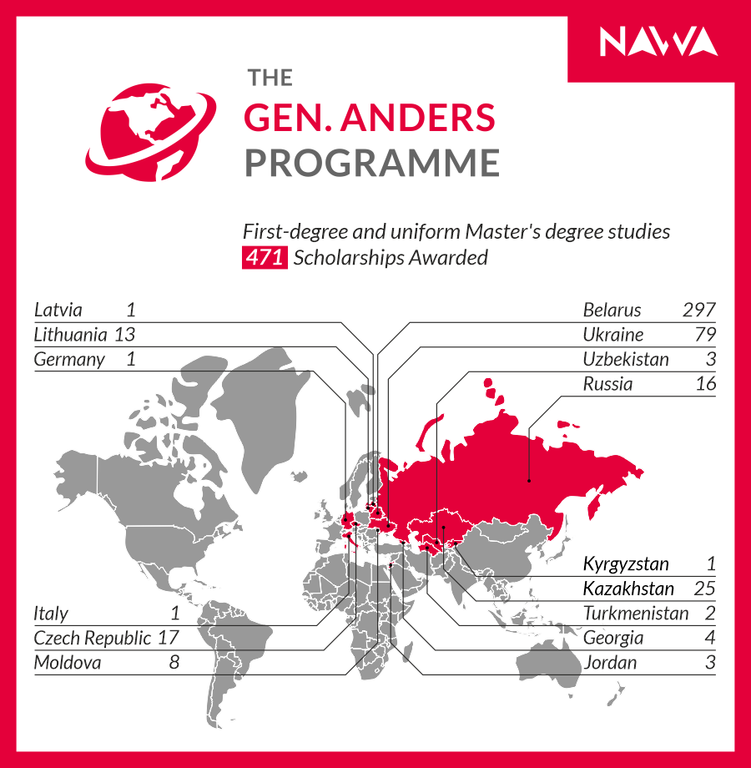 Within the call for applications 360 applications were submitted, including 311 applications meeting the formal criteria of the Programme. Following the content-related evaluation, 131 scholarships were awarded for second-degree studies.

As in the case of first-degree and uniform Master’s degree studies, the applicants most often chose studies at the Jagiellonian University, the University of Warsaw and SGH Warsaw School of Economics. Nearly 20 candidates declared technical universities as their choice. 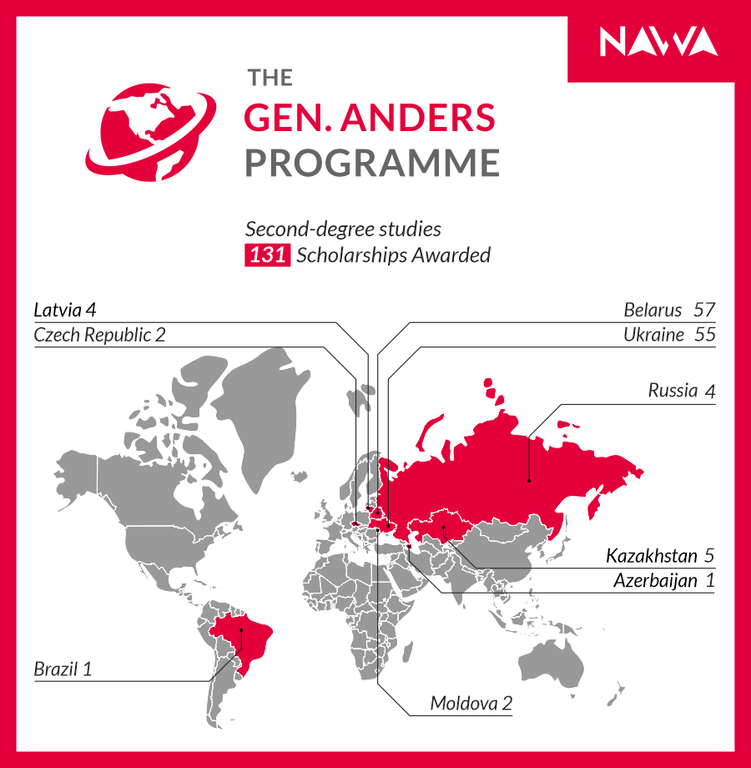 Why is it worth to be a beneficiary of the Gen. Anders Scholarship Programme for the Polish Diaspora?

Poland is a country of opportunities, where every young person – a Pole or foreigner – can fulfil their ambitions, says Stanisław Apriłaszwili, a scholarship holder of one of the Programme editions. From an early age Poland was a different world to me. I grew up in Lviv, and with the frequent successive trips to Poland, I grew to believe that the quality of life and studies there were very high. The arguments that ultimately convinced me to go to university in Poland were the rich offer of student exchange and projects as well as a diploma that was valued abroad. In the course of my studies, I met wonderful people to whom I owe my personal and academic development. This is why I don’t regret my decision from seven years ago.

More stories about the scholarship beneficiaries of the past editions of the Gen. Anders Scholarship Programme here

More about the Gen. Anders Scholarship Programme for the Polish Diaspora