The 21st century is a period of the information civilisation, whose part is the formation of knowledge-based societies. In the era of globalisation, this need is inextricably linked to learning mobility. In Poland, over the last decades the number of foreign students has been growing at a very moderate pace, starting from the 50s of the 20th century, when the first education programmes for the so- Third world countries were created, and it did not exceed three thousand up to the 80s. We could observe the first dynamic growth in the 90s, which was mainly related to economic and political transformations, extended offer of universities and development of scholarship structures addressed to persons of Polish origin and Poles living abroad. As indicated by the latest CSO data, Polish universities have recorded a record-breaking increase in the number of university students in this academic year – 72,743 students, i.e. by 6,950 more than the year before. This means an increase by as much as 10.56% over one academic year, perfectly reflecting the current dynamic landscape of internationalisation of higher education in Poland.

Statistics are not the only issue worth being looked at when considering the aspects of internationalisation of universities in Poland. The phenomena strongly linked to the increase in the number of foreign students are also: highlighting such needs as a holistic perspective in managing the internationalisation in universities, activation of the macro level related to the presence of foreign students or – or perhaps above all – raising awareness of the role of universities in the process of cultural adaptation and integration of foreign students. The presence of foreign students is conducive to taking on new challenges, both in terms of internationalisation of the curriculum and in terms of the co-existence of various national groups in universities and reorganisation of administrative aspects of their work. A reference to experience of other entities, involvement, observation and making conclusions, as well as a sense of responsibility are an important part of the action, which will allow to take the issue of educational migration to Poland for the benefit of all parties to this process. 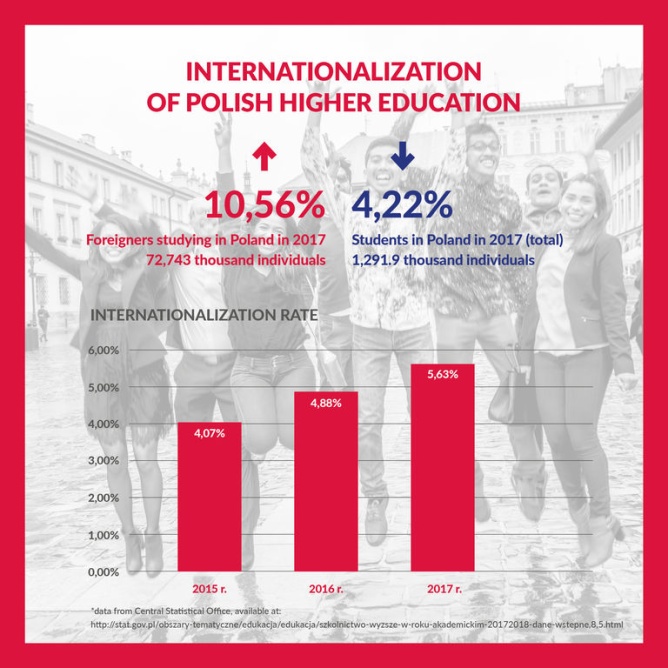