Reviving the History of the Jagiellon Dynasty - NAWA

Reviving the History of the Jagiellon Dynasty

What do we get when we combine academic interest in Old Polish, passion for the Nordic countries and a NAWA grant? A project promoting the Polish language, culture and history.

This project is called ‘Jagiellonians Heritage in Poland & Finland’. It is carried out by Dr. Ewa Cybulska-Bohuszewicz from the Institute of Literary Research of the Polish Academy of Sciences together with partners from the University of Jyväskylä in Finland. It is funded under NAWA’s Promotion of the Polish Language programme. The project has raised the interest in Polish Renaissance literature among the Finns, who have learned more about texts concerning their own history that had been unknown to them. Finally, three months of joint work on discovering the Jagiellonian heritage in Finland became the beginning of longer international scientific cooperation. 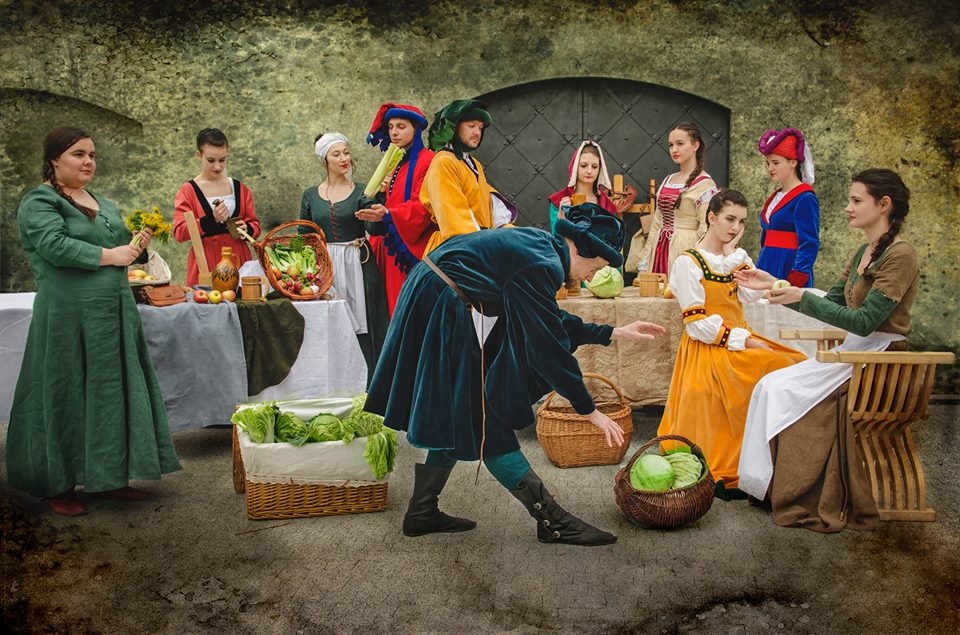 NAWA: How did the Jagiellonians come to Finland?

Dr. Ewa Cybulska-Bohuszewicz, Institute of Literary Research PAS: Catherine Jagiellon married John Vasa, Duke of Finland, who later became king of Sweden. The Finns think of Catherine as the one who introduced Renaissance culture and ideas in their country.

Was she to the Finns what Queen Bona Sforza was to the Poles?

Well, Catherine was the daughter of Bona and Sigismund the Old, after all. She brought with her to Finland a rich trousseau, including various equipment, furniture, dresses, jewellery and carpets. Finland was a fairly poor country at that time. Turku Castle, where John and Catherine lived directly after their marriage, differed considerably from the chambers of the royal Wawel Castle in Cracow that Catherine was used to. Not everyone was familiar with the rules of court etiquette or with proper table manners. The use of cutlery was fairly rare.

Was this a custom popularised by Catherine Jagiellon?

The inventory of Catherine Jagiellon’s property included ‘gilded’ as well as ‘golden forks’ in various sizes. The inventory is one of the crucial documents that allow us to learn more about the Jagiellonian heritage in Finland. Unfortunately, it is very difficult for the Finns to study this document — virtually impossible.

Polish and Finnish belong to two different language families (Polish is a Slovene language, whereas Finnish comes from the Finno-Ugric group) and are dissimilar in all possible aspects. In addition, Old and modern Polish differ in numerous respects in terms of the language systems, grammar, and vocabulary. Renaissance texts are not necessarily written in the fairly understandable language we know from the poems of Mikołaj Rej or Jan Kochanowski. There is a wide range of documents that are extremely hard to understand for Poles, not to mention foreigners. The inventory I have mentioned belongs precisely to this group. It includes numerous specialised expressions, e.g. names for pieces of clothes or jewellery, that have become completely obsolete. Who is now familiar with words such as ‘alspant’ (a decorative necklace), ‘pendent’ (a belt from which the sabre hung), ‘gurgiel’ (a type of collar, ruff or cape), ‘kitlik’ (a type of woman’s jacket or waistcoat), or ‘hazuka’ (home dress)? Currently, the ‘Trousseau’ is being studied by Nina Manninen, a PhD student from the University of Turku. She aims to reconstruct the equipment present in Turku Castle in Catherine’s times and describe Catherine’s entire property based on this document and an existing Swedish manuscript from 1563. Nina works with me on the project we are talking about. We prepared a presentation of the manuscript for that purpose. Since Nina is unable to reconstruct the content of the document on her own, I will be helping her in preparing her dissertation as second thesis advisor.

Does the project about the Jagiellonian heritage focus on Catherine’s inventory?

No, not only. Its central purpose is to prepare the ground in Finland for the reception of Old Polish texts concerning that country. It involves me presenting Old Polish texts to researchers from Finland and Sweden. We held an international conference on 14 December 2020 titled Jagiellonians Heritage: Perspectives of International Research. It was attended by scholars from the universities in Helsinki, Turku, Jyväskylä, Tampere, Stockholm, Uppsala, Vilnius, but also Oxford. They presented their papers alongside Polish researchers from Lublin, Łódź, Toruń and Warsaw. Moreover, together with our foreign partners, we ‘revive history,’ as Eva Mattsson, an art historian from Sweden, likes to say. Eva delivered for us a lecture on the Renaissance in Sweden and on historical reconstruction. 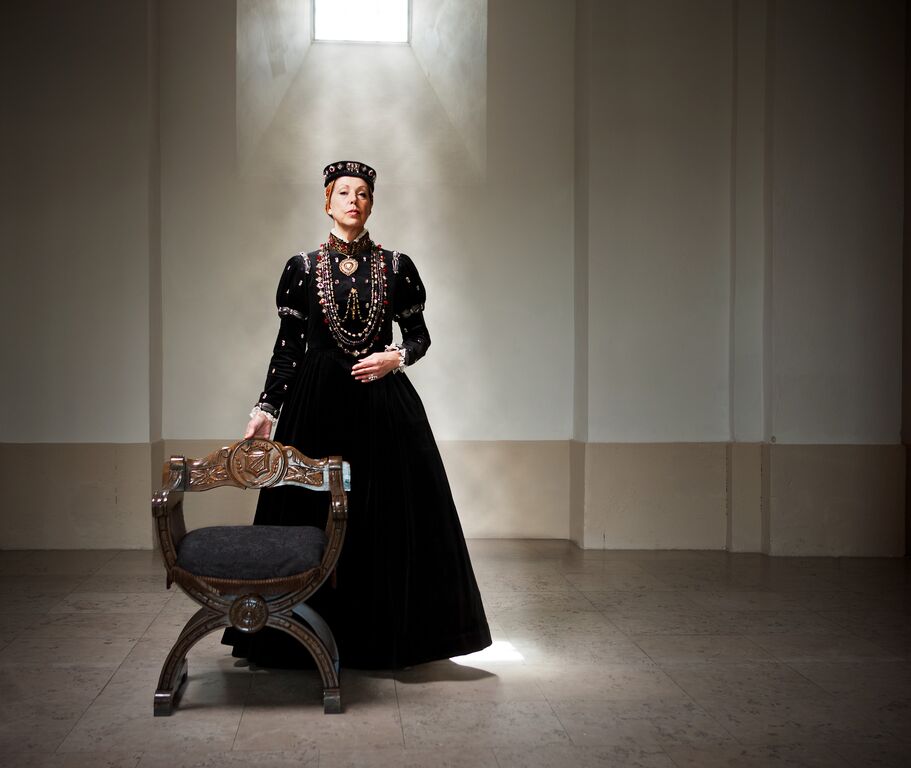 How do you ‘revive history’?

Catherine introduced the culture of feasts in Finland. Her arrival brought life to Turku Castle, where feasts and dances were held to honour the newly married couple. Therefore, we came up with the idea that our project should feature reconstruction shows and workshops where elements of court ceremonies, dances, music and cuisine would be revived. Reconstruction, which still seems to be underestimated in Poland, constitutes an important part of Finnish archaeological research. Eva Mattson, who is not only an art historian and performer, but also the author of the first monograph on Catherine written in Swedish, uses reconstruction to introduce us to the reality of the Renaissance. Apart from that, I have planned presentations of Renaissance dances and tableaux vivants, or living pictures, based on works of art. The project has its Facebook fanpage and a blog and YouTube channel. This is how you can follow our activities. 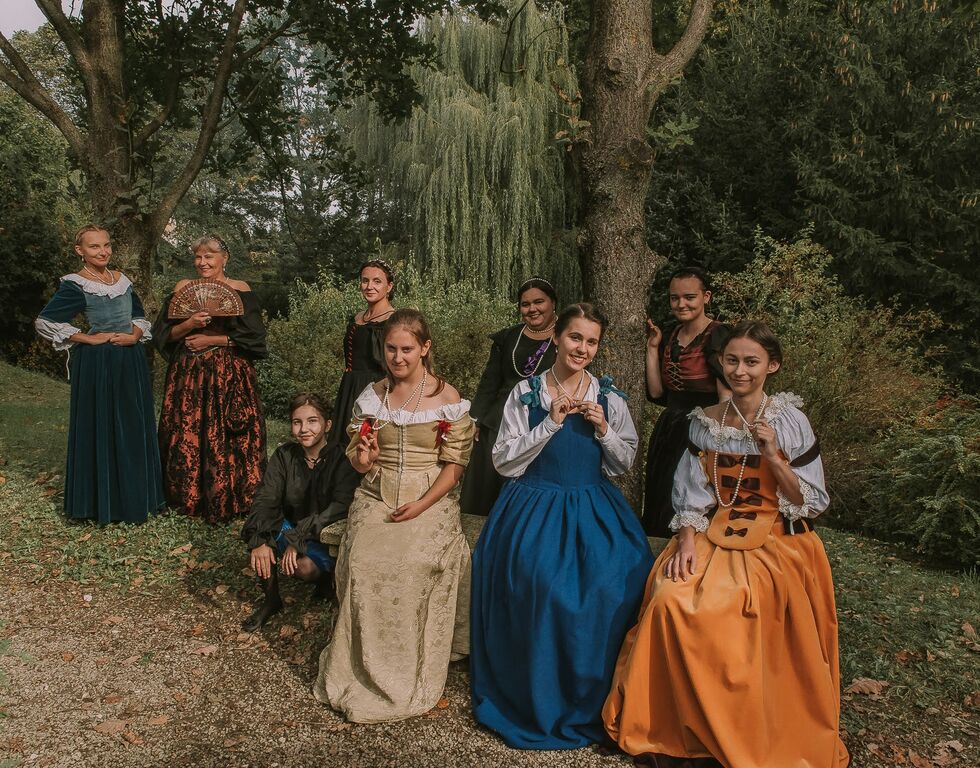 Dancers and reenactors from the Belriguardo Foundation.

We keep talking about what Poland can offer the Finns. Does it work the other way round? Is there anything we can learn about our heritage from the Finns?

Certainly. The Åbo Akademi collections in Turku include a part of the book collection of Sigismund II Augustus that the king bequeathed to Catherine Jagiellon. These books need to be studied and described. In our project, Sigismund’s collection is researched by Susanna Niiranen from the University of Jyväskylä and Peter Sjökvist from Uppsala University.

Your research focus is Old Polish literature, you are working on a dictionary of sixteenth-century Polish. How did you come up with the idea to study the heritage of the Jagiellon dynasty in Finland?

I have been interested in the Nordic countries since childhood. I used to learn Finnish on my own. I have some command of the language, but I want to keep improving. During my Erasmus+ visit to Sweden I realised that the subject of the Jagiellonians was a terra incognita in Finland. At the same time, I learned that there was a great need to study Polish texts from the period of the Renaissance. I received great support from Professor Marjo Kaartinen from the University of Turku, who helped me get in touch with other Finnish researchers – Susanna Niiranen and Anu Lahtinen. Both these scholars confirmed what my intuition told me: the Jagiellonian heritage constitutes a remarkable part of the Finnish heritage and needs to be researched.

And how did NAWA come into this?

I was looking for the possibility to finance my ideas entailing the reception of texts associated with the Jagiellonians in Finland. This is when I received a message from the Research Support Office at my Institute saying that NAWA had announced a call for proposals under the ‘Promotion of the Polish Language’ programme. This was it! I obtained the grant and we could launch our project.

What is going to happen after the project ends?

The product of the conference will be a monographic issue of the prestigious journal Scando-Slavica, which is published at Stockholm University. The issue will be devoted to the heritage of the Jagiellonians in Sweden, Finland, but also Lithuania and Poland. Furthermore, the cooperation with our Finnish partners does not cease after three months, when the project ends, for instance because I am becoming involved in studies of Catherine’s inventory for quite a few years as Nina Manninen’s second thesis advisor. I hope we will be able to translate and publish the text of the inventory in Finland. I trust it will be the beginning of an international corpus of Old Polish texts from the Jagiellonian period. I think that the key task at this point is to create such a corpus and translate the texts at least into English, so that they are available for reception outside of Poland.

Is there any interest in Old Polish texts around the world?

The examples of our project in cooperation with Finland or the international ERC-funded project The Jagiellonians headed by Natalia Nowakowska (with whom we cooperate, as well) at the University of Oxford demonstrate that such research is necessary.

Our team, which was established already some time ago, has gained its chance to enter into meaningful cooperation right now thanks to the NAWA grant, so we will keep working. We want to apply for grants to finance further research: in Poland and in Finland. It seems that this NAWA-funded project will have far-reaching results and morph into long-term international scientific cooperation. 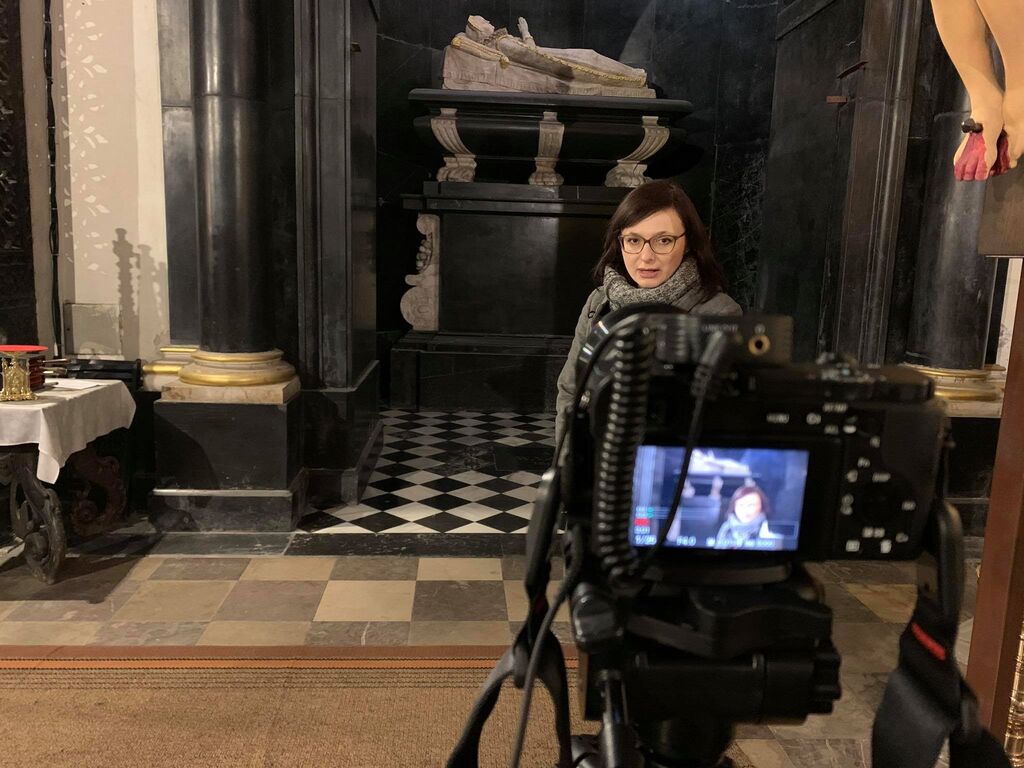 Dr. Ewa Cybulska-Bohuszewicz, assistant professor at the  Institute of Literary Research of the Polish Academy of Sciences (in the photo in the Church of the Assumption of the Blessed Virgin Mary and Bl. Stefan Wincenty Frelichowski in Toruń during the preparation of the recording "In the footsteps of Anna Wazówny"; in the background you can see the sarcophagus of Anna Wazówna). She is a lexicographer and literature historian. Her research interests are natural sciences in Poland in the period of the Renaissance, religious literature, and border phenomena in early literature. She is the principal investigator in the project ‘Jagiellonians Heritage in Poland & Finland’ financed by the Polish National Agency for Academic Exchange under the Promotion of the Polish Language programme.