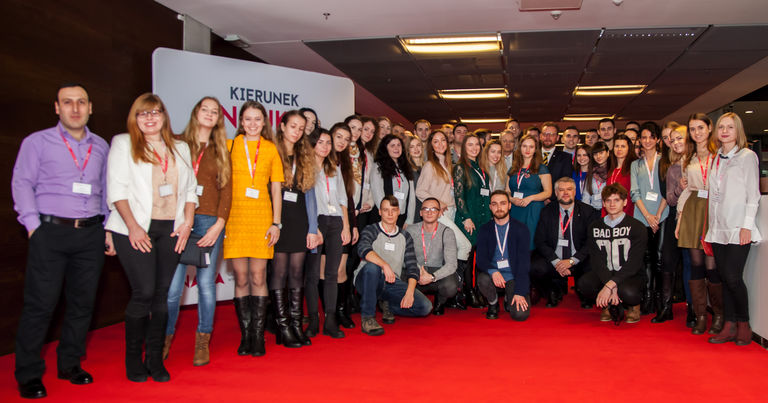 On December 1, we had the pleasure of spending the day with the new NAWA scholarship holders. Students and PhD students from the Eastern Partnership countries - Ukraine, Georgia, Armenia and Belarus – have come to Warsaw from all over Poland to take part in the official inauguration of this year’s edition of the Stefan Banach Scholarship Programme.The guests were welcomed by Director of NAWA and the representatives of co-organizers of the Stefan Banach Scholarship Programme - Professor Łukasz Szumowski, Undersecretary of State in the Ministry of Science and Higher Education, and Marek Magierowski, Undersecretary of State in the Ministry of Foreign Affairs.

During the conference, Director of NAWA, Łukasz Wojdyga, announced good news - as of the next year, there will be more grants under the Stefan Banach Scholarship Programme. Deputy Foreign Minister Marek Magierowski announced that as a result of the review of the priority countries from 2018, the Ministry of Foreign Affairs plans to increase the territorial coverage to include five Central Asian countries: Kazakhstan, Uzbekistan, Turkmenistan, Kyrgyzstan and Tajikistan.

Director of NAWA presented the biography of Professor Stefan Banach, the patron of the programme and one of the founders of the Lwów School of Mathematics. “The story of his life carries two messages for us. Firstly, you can do great things with hard work, secondly, even in such a specific field as higher mathematics, you need luck. And I wish you both these elements during your academic career!”

Minister Magierowski pointed out the great importance that the Eastern Partnership has for us and assured about the friendliness and solidarity of Poland towards the countries from which the scholarship holders came. Apart from the possibility of education at the highest European level, the value that Stefan Banach Scholarship also offers is building of ever-growing relationships between Poland and its eastern neighbours. “I hope that after the scholarships is ended you will be ambassadors of our country,” Deputy Minister of Foreign Affairs added.

Minister Szumowski shared with the guests the most personal reflections. Based on his own academic experience, he encouraged the scholarship holders to establish the widest possible network of friendly relationships that always bear fruit in professional life. “Science and studies are, of course, the most important goals of your presence in Poland, but I strongly recommend you the non-official part of student life that allows you to create close relationships, friendships and common projects.”