Dr. Marcin Chrząszcz, fellowship holder under the Bekker Programme, participates in the research of the tracking of the ‘new physics’ neutrinos.

The study of neutrinos brings science closer to answering the question about the origin of the universe. Dr hab. Marcin Chrząszcz from the Institute of Nuclear Physics of the Polish Academy of Sciences (IFJ PAN) in Kraków from September 2019 to the end of July this year, at the Technical University in Munich (Technische Universität München), is implementing the project „Establishing new physics effects in b->s transitions”. The project received funding from the National Agency for Academic Exchange (NAWA) under the Bekker Programme. The programme enables scientists to visit foreign research centers.

- Participation in research at international scientific centers accelerates research work. Discussing the results with the team at the blackboard is much more effective than sending 100 emails. The possibility of establishing contacts with scientists from other countries is also important - says Dr. Marcin Chrząszcz.

What is the research about? An international team tracking the ‘new physics’ neutrinos has checked the data of all the relevant experiments associated with neutrino detections against Standard Model extensions proposed by theorists. The latest analysis, the first with such comprehensive coverage, shows the scale of challenges facing right-handed neutrino seekers, but also brings a spark of hope.

In all the processes involving neutrinos that have been observed, these particles exhibit a feature referred to by physicists as left-handedness. Right-handed neutrinos, which are the most natural extension of the Standard Model, are nowhere to be seen. Why? The latest, extremely comprehensive analysis carried out by an international group of physicists, including the Institute of Nuclear Physics of the Polish Academy of Sciences (IFJ PAN) in Cracow helps to answer this question. For the first time, data from all the relevant experiments, directly and indirectly dedicated to neutrino detections, were included and checked against the ranges of parameters imposed by various theoretical extensions of the Standard Model.

The first subatomic particle, the electron, was observed more than 120 years ago. Since then, physicists have discovered a whole plethora of them. The richness of the building bricks of nature is explained on the assumption that the world consists of massive quarks, occurring in six flavours, and much less massive leptons, also in six flavours. Leptons include the electron, the muon (weighing 207 times the mass of the electron), the tau (3477 times the mass of an electron) and the corresponding three types of neutrinos.

Neutrinos interact extremely poorly with the rest of matter. They also show other features of particular importance for the shape of modern physics. It has recently been discovered that these particles oscillate, i.e. they are constantly transforming from one type to another. This phenomenon means the observed neutrinos must have a certain (though very low) mass. Meanwhile, the Standard Model, a modern theoretical tool describing subatomic particles with great accuracy, leaves no alternative: within its framework neutrinos cannot have any mass! This contradiction between theory and experience is one of the strongest indications in favour of the existence of unknown subatomic particles. The mass of neutrinos, however, is not their only puzzling property.

„We learn about the presence of neutrinos by observing the decay products of various particles and comparing what we have recorded with what theory predicts. It turns out that in all cases indicating the presence of neutrinos, these particles always had the same helicity: 1/2, i.e. they were left-handed. This is interesting because other particles of matter can have both positive and negative spin. But there are no right-handed neutrinos to be seen! If they don't exist, then why not? And if they do, where are they hiding?” asks Dr. Marcin Chrząszcz (IFJ PAN).

An article just published in the European Physical Journal C by an international team of physicists brings us closer to answering the above questions. Scientists from IFJ PAN, the European Organization for Nuclear Research – CERN, Université catholique de Louvain (Louvain-la-Neuve, Belgium), Monash University (Melbourne, Australia), Technische Universität München (Germany) and University of Amsterdam (Netherlands) ) carried out the most accurate analysis to date of the data collected in over a dozen of the most sophisticated experiments in subatomic physics, both those of a general nature and those directly dedicated to observing neutrinos (including PIENU, PS-191, CHARM, E949, NuTeV, DELPHI , ATLAS, CMS).

The researchers did not limit themselves to merely increasing the number of experiments and the amount of data processed. In their analysis, they considered the possibility of hypothetical processes proposed by theoreticians that require the presence of right-handed neutrinos. One of them was the seesaw mechanism associated with Majorana neutrinos.

„The theory suggests that if Majorana neutrinos exist, there can also be a seesaw mechanism. This would mean that when neutrinos with one helicity state are not very massive, then neutrinos with the opposite helicity must have very large masses. So, if our neutrinos which are left-handed have very low masses, if they were to be Majorana neutrinos, in the right-handed version they would have to be massive. This would explain why we haven't seen them yet”, says Dr. Chrząszcz and adds that massive right-handed neutrinos are one of the candidates for dark matter.

The latest analysis, carried out using the specialized open source GAMBIT package, took into account all currently available experimental data and parameter ranges provided by various theoretical mechanisms. Numerically it was extremely onerous. The seesaw mechanism itself meant that the calculations had to use floating-point numbers not of double, but of quadruple precision. Ultimately, the volume of data reached 60 TB. The analysis had to be carried out in the fastest Polish computing cluster Prometheus, managed by the Academic Computer Centre Cyfronet of the AGH University of Science and Technology.

The results of the analysis, financed on the Polish side from grants from the Foundation for Polish Science and the National Agency for Academic Exchange, do not inspire optimism. It turned out that despite many experiments and a huge amount of collected data, the possible parameter space was penetrated to only a small extent.

Fortunately, there is also a shadow of hope. A trace of a potential signal was captured in the data that could be associated with right-handed neutrinos. At this stage it is very weak and ultimately it may turn out to be just a statistical fluctuation. But what would happen if it wasn't?

„In this case, everything indicates that it would already be possible to observe right-handed neutrinos in the successor to the LHC, the Future Circular Collider. However, the FCC has a certain disadvantage: it would start working about 20 years after its approval, which in the bestcase scenario may take place only next year. If it doesn’t, we will have to arm ourselves with a great amount of patience before we see right-handed neutrinos”, concludes Dr. Chrząszcz. 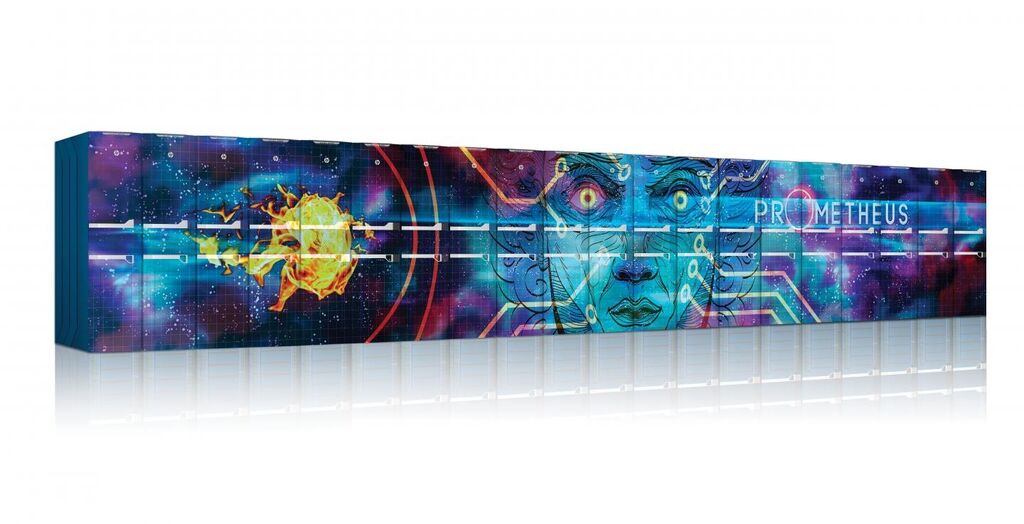 The Cracow supercomputer Prometheus has helped researchers from the Institute of Nuclear Physics of the Polish Academy of Sciences track right-handed neutrinos. Photo: Cyfronet, AGH.