Polish delegation at the 30th EAIE 2018 conference and expo - NAWA

Polish delegation at the 30th EAIE 2018 conference and expo

Just before the beginning of the new academic year, the Polish universities along with NAWA, the Ministry of Science and Higher Education and the Conference of Rectors of Academic Schools in Poland (KRASP) are taking part in the largest conference and expo in the field of higher education in Europe – EAIE.

The 30th edition of the event, under the banner Facing Outward is held in Geneva, Switzerland. It gathered more than 5 thousand participants associated with the internationalisation of higher education – from academics through specialists for foreign cooperation to state agencies and organisations involved in the issue of internationalisation. It provides a unique opportunity to establish and develop contacts conducive to improving the quality of activities with regard to higher education and to exchange knowledge and experience.

For the 30th anniversary of the conference, the NAWA prepared a 40 metres long stand located at the heart of the expo hall, where as many as 24 Polish universities meet with their partners and promote their offer. NAWA, along with the Ready Study Go! Poland is a silver sponsor of the event and the benefactor of the official mobile app EAIE Geneva 2018. On the first day of the event, the Polish stand was officially opened by the Ambassador of the Republic of Poland to the Swiss Confederation, Jakub Kumoch.

This year’s event is full of numerous side events, which serve to build the brand of Poland as a country of attractive educational and scientific opportunities and make the participants more familiar with the higher education sector and its objectives in Poland and in the region. Together with the agencies from the Czech Republic and Hungary, on the first day of the conference NAWA prepared a discussion panel Mapping internationalisation in Hungary, Poland and the Czech Republic. The session, with Dr Zofia Sawicka, Deputy Director of NAWA, was concentrated on programmes dedicated to students and scientists, trends in foreign recruiting in the region and joint challenges, such as striving for the diversification of countries of origin of students, visa-related problems and quality vs quantity in shaping the universities’ activities.

Also, since yesterday all visitors to the Polish stand have been able to take part in the games prepared on the occasion of the 30th conference. The Polish delegation, in cooperation with the Centre for International Cooperation in Education from the Czech Republic oraz Tempus Public Foundation from Hungary, organises a game aimed at promoting priority countries during this year’s event in Geneva. In addition, the Polish stand is also a partner of the game prepared by the European Commission, entitled Erasmus + treasure hunt.

The intense first day was concluded by adopting Central European Countries Reception during which the representatives of the Polish, Czech and Hungarian institutions hosted their partners so as to discuss in a pleasant atmosphere the issues on the internationalisation in the area of Central and Eastern Europe. The event was added splendour by the presence of the Ambassador of the Republic of Poland and the representatives of the Czech diplomatic post.

During their stay in Geneva, Dr Zofia Sawicka and the Agency’s representatives are also participating in numerous meetings aimed at strengthening the NAWA’s offer. The plan of the Deputy Director included, inter alia, meetings with the Swiss agency and Polish representatives in the EAIE General Council and EAIE Expert Community Employability skills, graduate careers and international internships (EMPLOI).

EAIE (European Association for International Education) is an organisation established in 1989 and currently bringing together more than 3,000 members – is in the lead of the largest global non-governmental organisations operating in the field of education, particularly in higher education. The EAIE conference and fair are held every year in a different European country. 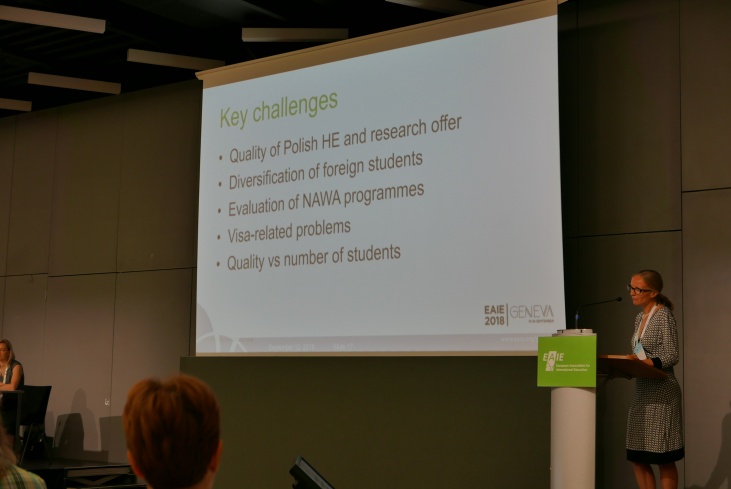 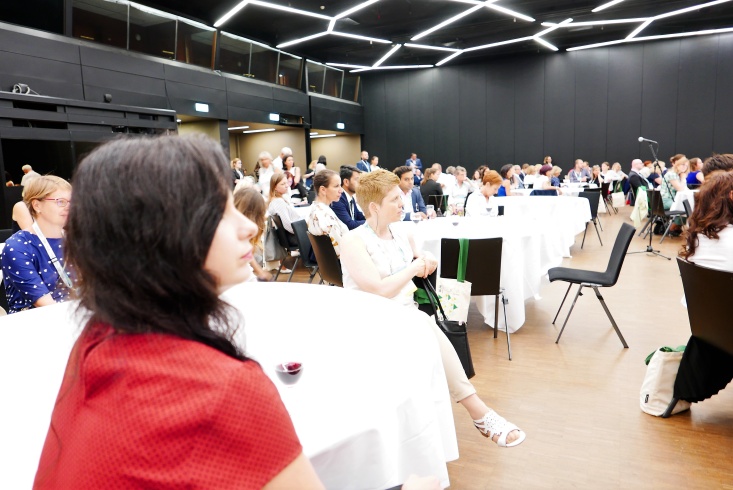