The Polish School of Transplantology - NAWA

The Polish School of Transplantology 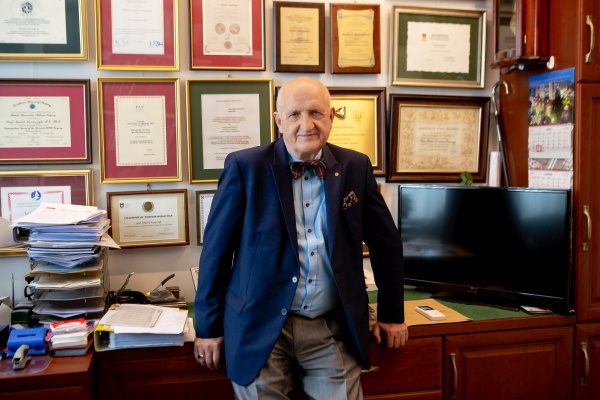 The achievements of Polish doctors and scientists in the area of transplantation medicine have allowed to implement numerous programmes of vascularised organ and bone marrow transplantations, which have saved the lives of thousands of patients.

In December 1967, the news spread around the world that the first heart transplant had been performed by Christiaan Barnard. Poland developed a heart transplantation programme as well, following a successful transplant performed by a team of cardiovascular surgeons led by Professor Zbigniew Religa in 1985 in the Cardiosurgical Department (in Zabrze) of the Silesian Medical University. The centre – now headed by Professor Marian Zembala – still boasts world class achievements. Encouraged by Prof. Religa’s success, further institutions joined the programme, including the Cardiosurgical Department of the then Medical University in Kraków headed by Professor Antoni Dziatkowiak.

A vital stage in the development of transplantation medicine in Poland was to determine the diagnostic criteria of brain death, which was accomplished in the 1980s by teams of experts in anaesthesiology and intensive care medicine, neurosurgery and forensic medicine. This step facilitated the harvesting of organs from deceased donors. Parallel to the programme of organ transplantation in adults, Poland developed a programme of paediatric transplantation, particularly transplantation of kidney and liver, led by Professor Piotr Kaliciński and including transplants of segments of the liver from living donors.

The progress of transplantology in Poland opened the possibility to initiate programmes of complex transplantations, including limb and face transplants. The development of clinical programmes was accompanied by new research projects run by Polish doctors and scientists, who thus contributed to the progress of world transplantology. The studies began in the 1960s, when Prof. Jan Nielubowicz’s team developed its own antilymphocyte sera. In the late 1960s and early 1970s, a team led by Professor Wojciech Rowiński invented a new solution for storing kidneys and demonstrated the protective effects of lidocaine and dopamine in the case of an ischaemia-reperfusion injury to an organ. In the course of preparing a liver transplantation programme, another research team, headed by Professor Waldemar Olszewski, developed a model of pathogenesis of hyperacute transplant rejection.

In the 1990s, Prof. Zbigniew Religa’s team developed a heart support system for patients suffering from a cardiac failure. In addition, a number of Polish transplantologists' achievements have been based on analyses of the results of the previously performed transplantations. In the years 2014–2016, Ass. Professor Michał Grąt with a team of surgeons at the Department of General, Transplant and Liver Surgery headed by myself developed and implemented, in clinical practice, new criteria for qualifying patients suffering from hepatocellular carcinoma for liver transplantation, thus increasing the number of patients who could benefit from this method of radical treatment.

Hopes for Polish transplantology are high also on account of the advanced preparations made by Professor Waldemar Patkowski from the Department of General, Transplant and Liver Surgery of the Medical University of Warsaw. Prof. Patkowski’s goal is to introduce a device for perfusion of a deceased-donor liver, which will notably increase the number of livers used for transplants.

The great achievements of the pioneers of Polish transplantology listed on the time axis were the foundation stones of the Polish school of transplantology, which consists of dynamically developing transplantation centres known all around the globe.

Prof. Marek Krawczyk, Chairman of Science Committee of the Conference of Rectors of Academic Schools in Poland, Member of Polish Academy of Sciences, Corresponding Member of Polish Academy of Arts and Sciences, Rector of the Medical University of Warsaw (2008-2016), Head of the Department of General, Transplant and Liver Surgery MUW (1998-2016), President of European Surgical Association (2016-2017). Awarded an Honorary Fellowship in the American College of Surgeons on October 2019.

Timeline of the Major Achievements of Polish Transplantology

- first transplantation of the islets of Langerhans, Prof. Andrzej Chmura and his team, Medical University of Warsaw

- first simultaneous heart and liver transplant, Prof. Mariusz Kuśmierczyk and his team, Institute of Cardiology in Warsaw and Prof. Krzysztof Zieniewicz and his team, Medical University of Warsaw