The first half of 2019 is over. See what has happened in the Polish National Agency for Academic Exchange - NAWA

The first half of 2019 is over. See what has happened in the Polish National Agency for Academic Exchange

Bam… and the first half of 2019 is over. Perhaps you are wondering what went on at NAWA in this time? We have prepared for you a short summary of this intense period, in which our Agency’s staff worked with zeal for the benefit of students, scientists and institutions and promoted Polish research and the higher education system abroad.

The first six months were above all the time of calls for applications. 7882 applications in total were submitted in all ongoing programmes. Most of them, namely as many as 4236, were directed at the Department of Programmes of Polish Language, with 1695 applications for the programme Polish language and culture summer courses. 720 candidates from 55 countries from around the globe qualified for funding. The several week-long course will be attended free of charge by students from China, Canada, Brazil, the United States, Ukraine and many others. In addition, the Department of Programmes of Polish Language announced the results of the first edition of POLONISTA – Programme for students of Polish Studies. Here, funding was granted to 43 out of 91 applicants. The scholarships holders come among others from Ukraine, China, Turkey, Bulgaria, Italy and Russia.

Most of the applications submitted for programmes for students and programmes for scientists are currently subject to formal or substantive evaluation. Students interested in NAWA’s scholarships submitted a total of 2325 applications in open recruitment procedures. Forty-eight candidates applied for funding under the new programme for foreign students Poland My First Choice Programme, with most applications coming from France, Italy and Estonia. On the last day of June, we announced the results in the Gen. Anders Programme for the Polish diaspora for second-degree studies. Almost 150 candidates will receive scholarships in the academic year 2019/2020. Most of the come from Belarus, Ukraine and Lithuania.

Individual scientists could apply for funding under five different programmes. They submitted 957 applications in total. The second edition of the Bekker Programme roused the interest of 457 scientists, the majority of whom wish to carry out their studies in the US, the UK and Germany. Interestingly, the greatest number of applications in the second edition of the Polish Returns programme for incoming researchers came from the very same three countries. As many as 355 applications from 65 countries were submitted in the new Ulam Programme directed at non-Polish scholars. Potential scholarship holders come among others from India, Argentina and Germany. As we have mentioned above, however, our experts are still in the process of reviewing the research projects proposed by the applicants. Scholarships under the Walczak Programme, in turn, which is dedicated to researchers in the areas of cardiology, oncology, allergology and infectious diseases, were applied for by 29 scientists. The best candidates will have the opportunity to visit the most excellent US research centres for three to six months. Moreover, we know the results of the call for applications for the Iwanowska Programme, which is directed at PhD students from Polish universities. Sixty-nine scholarships were granted in the first edition of the programme. The largest group were projects in the area of natural science. The most popular destinations are Germany, the US and France. The festive gala during which the scholarships were awarded took place on 26 June 2019 (it was the second gala of that significance – we had awarded scholarships to the winners of the first edition of the Bekker Programme at the beginning of the year). In addition, we opened calls for proposals for bilateral exchange of scientists with the Czech Republic, the Federal Republic of Germany, the French Republic – PHC Polonium – and the Republic of India.

Next, research centres and higher education establishments submitted a total of 364 applications in the relevant programmes. Moreover, 29 agreements were signed under the programmes International Alumni and STER based on applications submitted in 2018. As for the university networks CEEPUS, 114 applications were submitted for the academic year 2019/2020, of which 80 were selected. The network consists of 16 member countries. With 158 participating establishments, Poland is currently on the first place in terms of the number of accepted network coordinators and partners. 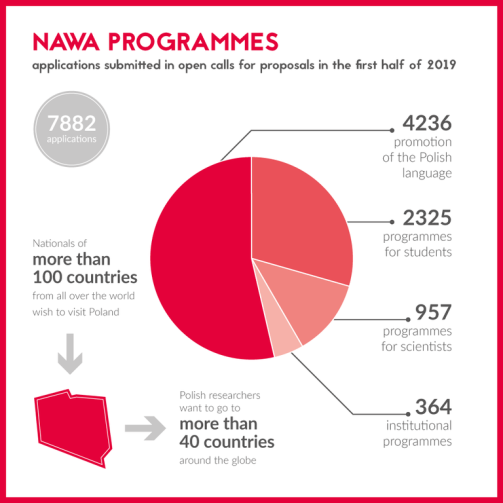 Other events of the last six months were: the series Days with NAWA, which were held at host universities in Rzeszów, Kraków, Szczecin, Gdańsk and Warsaw; an open day at our headquarters; a successive training meeting from the series Direct to Internationalization entitled ‘How to attract American students to Polish universities?’ organised in cooperation with Fulbright Commission; 11 webinars for potential applicants; appointment and the first meeting of the Scientific Committee for International Promotion of Polish Science, which is assisting NAWA in developing publications concerning the achievements of Polish scientists. 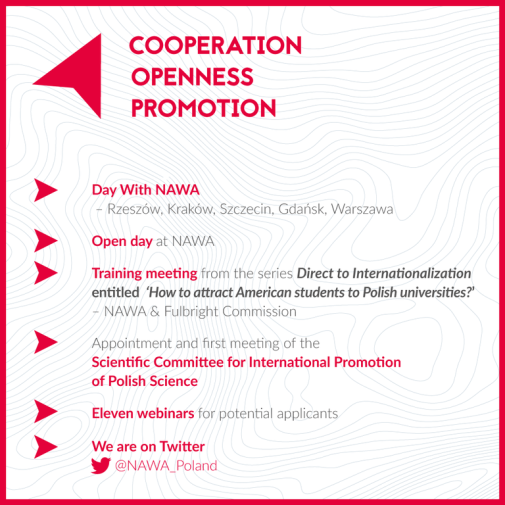 In the course of the campaign Ready, Study GO! Poland, together with university delegations, we visited the furthest corners of the world in order to promote the Poland’s higher education. Our mission took us to Mexico, Georgia, Greece, India, Uzbekistan and Tajikistan. In addition, we participated in all the major higher education conferences for the first time. We attended APAIE in Malaysia and NAFSA in the United States. 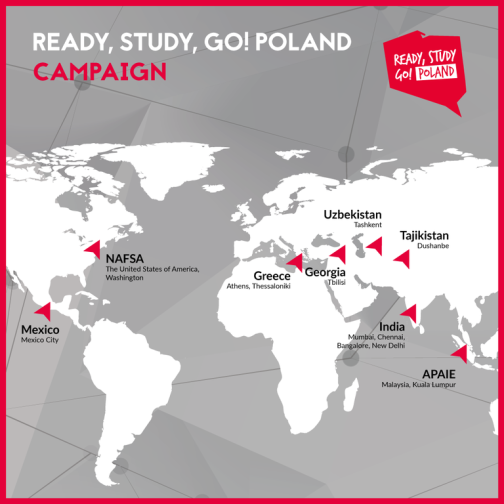 We keep you up to date with all the news at NAWA and in the Polish higher education via Facebook, LinkedIn and YouTube, and recently also Twitter. We are present at one of the most popular platforms in the area of science and higher education – Times Higher Education. Our representatives attend all major domestic and foreign conferences devoted to university education and research. We attend numerous meetings and take up cooperation with institutions that share our goal – to internationalise Polish higher education.

This seems like quite much! Yet the goals we set ourselves are big and important: they are not easy to achieve and require a great deal of work, but once they are attained, the satisfaction is twice as great. We hope that you feel equally proud when you see how much has happened in the course of the last six months at NAWA!